Numbers are key to what I do; They’re the basic data I use as evidence. Without them it’s often just supposition.

And nowhere is this truer than when trying to reduce bad[1] habits and reinforce good ones.

So a while back I invested a small amount of money in a very nice little app: Tally, a Simple, Eyes-Free Counter for iOS.

So this post is about why I like this app and also a request for an enhancement that I think would really make it more useful – at least to me.

I don’t mind sharing with you the three tallies I use[2]: 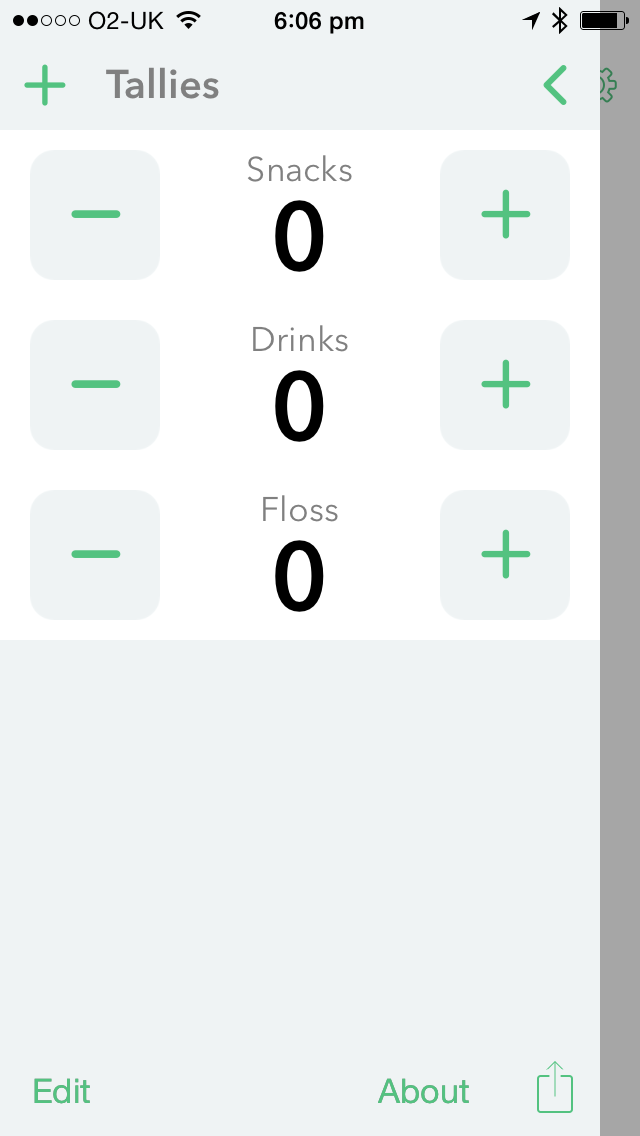 You’ll see here two unhelpful (perhaps) habits I’d like to indulge less in. Far more important, actually, is “Snacks” as there’s nothing wrong with my drinking.[3]

The above is a screen shot from the Tally app itself. You tap in the right place to bump a count (or Tally) up or down. You can, of course, clear tallies.

To make it easier to add to tallies, Agile Tortoise took advantage of the iOS 8 “Today” screen enhancements and created a Widget: 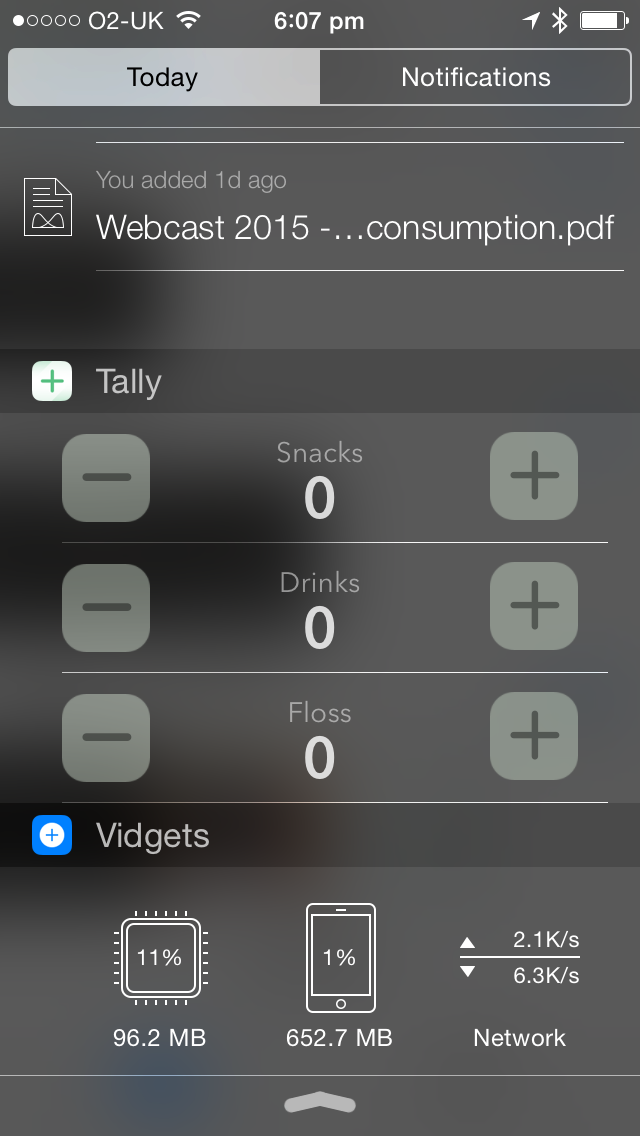 So this is nice.

But then came the Apple Watch and the app now sports a Watch counterpart:

This makes it even easier to add, for example, the pudding and the nice bottle of Proper Job I had with supper to the two relevant tallies: I just say “hey Siri open Tally” and I’m there.

One other thing I like – though I haven’t used this – is that Tally has its own x-callback-url scheme for automation. [4] This is unsurprising as Tally is developed by Greg Pierce who invented x-callback-url and uses it extensively in his Drafts app (which I also use).

At the moment I manually transfer the tallies – once a week – to a spreadsheet and clear them in the app. So I have some idea where I am with reducing or increasing them.

(I’ll probably back off and smooth them over 4-week periods, (not quite) also known as months. This kind of “squinting” might give me a better, smoothed, view.)

With the x-callback-url support I could probably automate this using the Workflow app and possibly Drafts. I’m not inclined to bother except, perhaps, as a learning exercise.

What Do I Want?

So in Theses on Feuerbach Karl Marx wrote: “Philosophers have hitherto only interpreted the world in various ways; the point is to change it.” So much of life is this way, and especially so for habits you’re trying to change.

So I could just [5] do less of the unhelpful and more of the helpful.

But it helps a lot if you understand when you do the things you’d like to less of. Snacking is a prime example of that.

So here’s what I propose: I’d like Tally – exposed through x-callback-url or similar – to keep a timestamp along with each increment or decrement of a Tally.

So I can see two immediate things here:

In both cases timestamps would really help here.

So I’ve been utterly honest about why I want timestamps with tally bumps – mainly to illustrate a real use case. I’ve no idea how Greg intended Tally to be used, nor how other people are using it. But it’s a nice little app that’s been well built and exploits much of the iOS and Apple Watch technology. I’d like to see it even more useful.

You might think I’ve been overly honest in this post. I actually find it helpful when other people admit to stuff where I can say “me too”. The human condition has a a lot of commonality.

And now my watch has just told me to stand up. So I guess it’s time to stop writing. 🙂 [8]