In my “Parallel Sysplex Performance Topics” presentation I have some slides on Coupling Facility Processor Busy. I’ve worried about including them, considering them borderline boring.1

In my head I justified them because they:

But, and not many people know this, RMF documents the picture for individual processors in SMF 74 Subtype 4. The reason this isn’t widely known is mainly the reports don’t show this level of detail.

One can speculate why this level of detail exists. My take is that it was relevant long ago when we had “Dynamic ICF Expansion”.2 This feature allowed an ICF LPAR to expand beyond the ICF pool into the GCP Pool. Performance Impacts of Using Shared ICF CPs describes this feature. (The document is from 2006 but it does describe this one feature quite well.)

There, you’d want a better picture of Coupling Facility processor busy than just summing it all up. In particular you’d want to know if the GCP engines had been used.

What Is Coupling Facility Processor Busy?

This seems like a silly question to ask, but it isn’t.

So a better definition is required, and thankfully RMF provides one. There are two relevant SMF 74 Subtype 4 fields:

Using these two the definition of busy isn’t hard to fathom:

This, as I say, is normally calculated across all processors in the Coupling Facility.

By the way, you might find Coupling Facility Structure CPU Time – Initial Investigations an interesting read. It’s only 9 years old. 🙂

But let’s come almost up to date.

I recently looked at a customer’s parallel sysplex and got curious about engine-level Coupling Facility Busy, so I prototyped some code to calculate it at the engine level. I not only summarised across all the RMF intervals but plotted by the individual 15-minute interval.

Here is the summarised view for one of their two 10-way z13 Coupling Facilities: 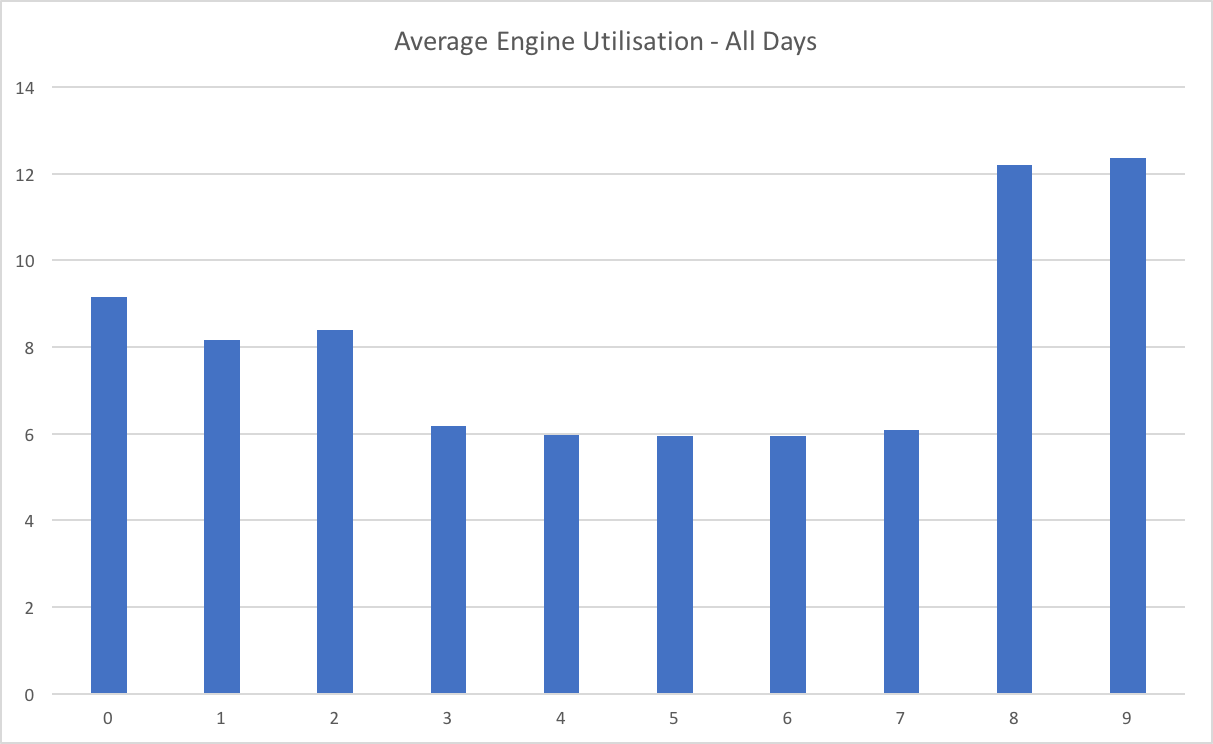 The y axis is Coupling Facility Busy for the engine, the x axis being the engine number.

So clearly there is some skew here, which I honestly didn’t expect. By the way, at the individual interval level the skew stays about the same. Indeed the same processors dominate, to the same degree.

A couple of points:

z14 introduced CFLEVEL 22. One area of change is in the way work is managed by the Coupling Facility Control Code (CFCC). In particular, processors have become more specialised. This is to improve efficiency with larger numbers of processors in a Coupling Facility.

Note: There’s no way of detecting a processor as belonging to one of these three categories.

So, this makes it even more interesting to examine Coupling Facility Busy at the individual engine level. I’ve not yet seen CFLEVEL 22 RMF data, but at least I have a prototype to work from, whether the customer’s data is at the CFLEVEL 22 or not.

2 thoughts on “Getting Nosy With Coupling Facility Engines”