It’s been a busy few weeks but we’ve a new episode out.

The experiment with narrowing the “stereoscape” was an interesting one. It is always going to be effort to do this, but having edited all 5 segments I got quite good at it. I think I maybe narrowed it a little too much, but I’d be interested in how it sounds to y’all. To my ears Marna and I (and indeed our guest and Marna) are coming at you from discernably different points, but it’s not too harsh.

This is the second episode where I added chapter markers. In case you’re not able to see them in your podcast client this is how it looks on my phone: 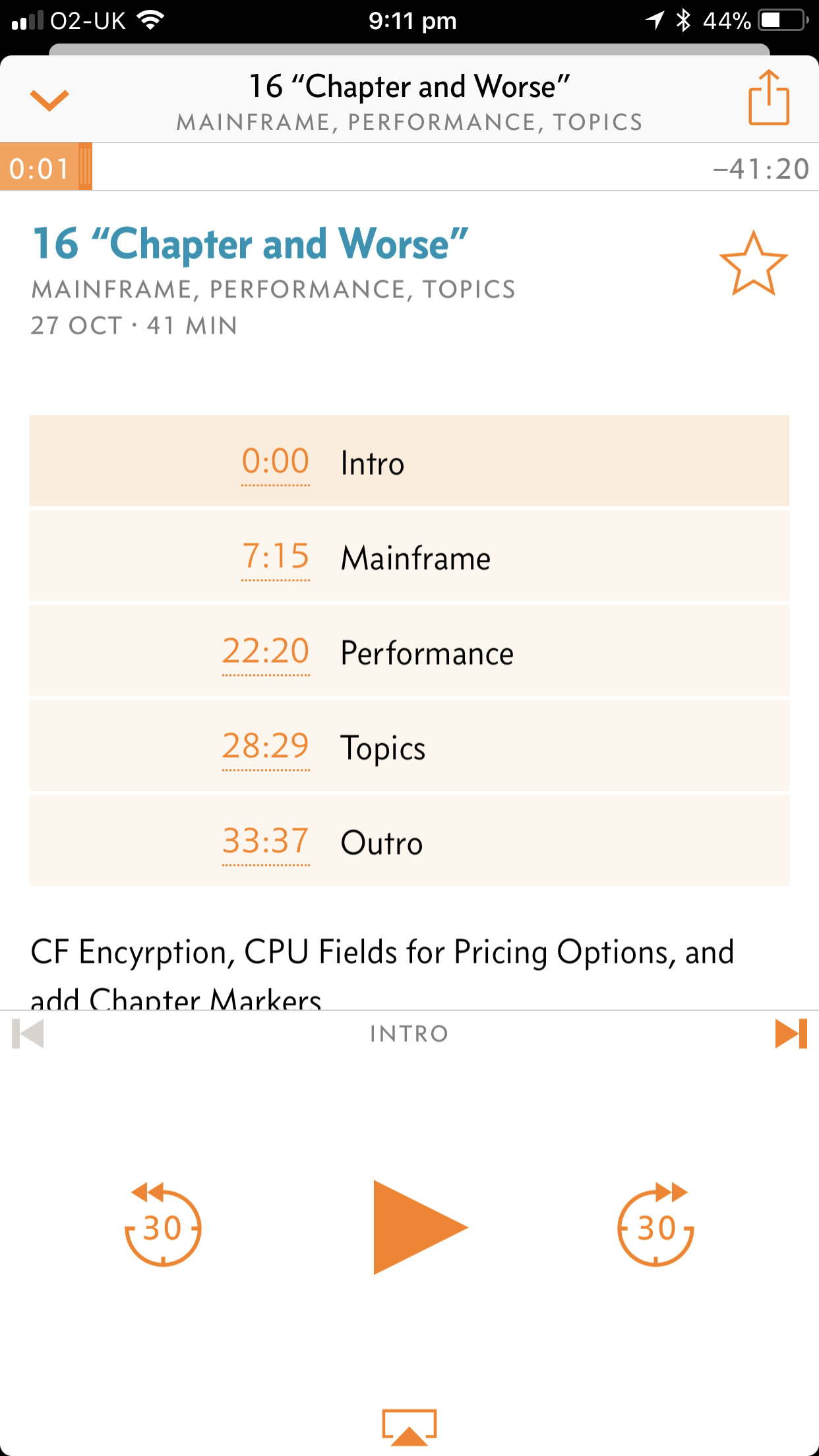 Anyhow, we hope you enjoy this show. Here are the show notes.

Here are the show notes for Episode 16 “Chapter and Worse”. The show is called this because our Topics topic is about adding chapter markers (and pictures!) to our published MP3 file. We hope those of you that can see them enjoy them.

Marna has just returned from conferences and events in Johannesburg ZA, Chicago IL, and Munich Germany.

Martin has been to Munich Germany, and also visited a customer in Siena Italy.

We have received feedback (in person, in Munich!) that our stereo separation of the channels was a little dizzying. Martin will be trying to make it less severe to relieve this effect.

Thanks for the feedback; We want to hear more!

Martin and Marna talked to the developers of the DocBuddy app, about their new release.

The latest release is 2.0.1, and has added a lot of social aspects (and fixed reported problems). The ability to look up messages is still there, but z/OS V2.3 isn’t there yet. We anticipate it will be coming soon, though, as it is important.

You can sign into the app (very easy to do!), and subscribe to Products and People, and discover them. People are “Influencers” and can be subscribed to. Products doesn’t include all the core z/OS elements, but Communications Server is there and has been active.

Feedback can be given, it’s an email under “Settings”, which took us a while to find.

Our “Mainframe” topic discusses a new z/OS V2.3 function, Coupling Facility Encryption, with Mark Brooks, Sysplex Design and Development. Mark talked about this latest capability in Sysplex, which has been getting a lot of attention as part of the larger Pervasive Encryption direction.

Mark explained that CF Encryption means that the customer’s data is encrypted by XCF in z/OS, sent along the link as encrypted, and stored as encrypted on the Coupling Facility.

z/OS sysprog needs to set it up by:

For more information, see the z/OS Setting Up a Sysplex.

Martin talked about MSU-related CPU fields for doing software pricing analysis. Some of these fields are used by SCRT in support of the new Mobile function.

Most notably the fields cover:

These categories of CPU/MSUs are brought to life using the Workload Manager ISPF panels, using a new reporting attribute. You scroll twice to the right to get there. The values in the field can be MOBILE, CATEGORYA, or CATEGORYB.

Container Pricing is another pricing model, ….., and maybe another topic on that later.

The overall idea: Be aware of the new fields that you will be analysing. These fields are available at two levels:

Our podcast “Topics” topic is about adding chapter markers to the MP3 file for podcast apps. This makes it nice to skip from one section to another easily. Our podcast has five sections, each with its own graphic and chapter.

Copyright on the MP3 specification expired finally in 2017, allowing more things to be done with the format. Chapters is one of them.

Martin adds the chapter markers into the MP3 file after doing the audio editing with Audacity. He then takes the MP3 file, and runs it into another tool on iOS called Ferrite. Audacity doesn’t have the ability to mark chapters (or to add the graphics), but Ferrite does. Hence it has to be processed with this second program to give the final MP3 chapters and graphics! (Ferrite was among the first tools to support Chapter Markers, with or without graphics.)

On Martin’s iOS podcast app, Overcast, he sees the chapter markers and graphics fine. Marna uses Android and CastBox, in which she cannot see them. She then tried another Android app, PodcastAddict, which claimed to have chapter support, and yet she still doesn’t see them. So it goes. 🙂

Martin will be in Whittlebury UK 7-8, November for GSE UK.

Marna will also be in Whittlebury UK 7-8, November for GSE UK with Martin. Then, at the big IBM Z event Systems Technical University in Washington, DC, 13-17 November. Then, in Milan, Italy 28-29 November for a System Z Symposium.

Martin published one blog post, which highlights a screencast of his:

Marna has an idea for a blog, but needs more time to do some testing for it. It will be coming!

You can reach Marna on Twitter as mwalle and by email.

You can reach Martin on Twitter as martinpacker and by email.