Now with free map :-), this is the concluding part of a four part series on batch parallelisation, with especial focus on cloning.

In previous parts I discussed:

This part wraps up with thoughts on implementation. I’m going to break it down into:

While there probably are iterations of this, this is the essential 1-2-3 sequence within the cycle.

I’m repeating the example from Part 3, partly because I raised some issues in relation to this diagram I want to cover here: 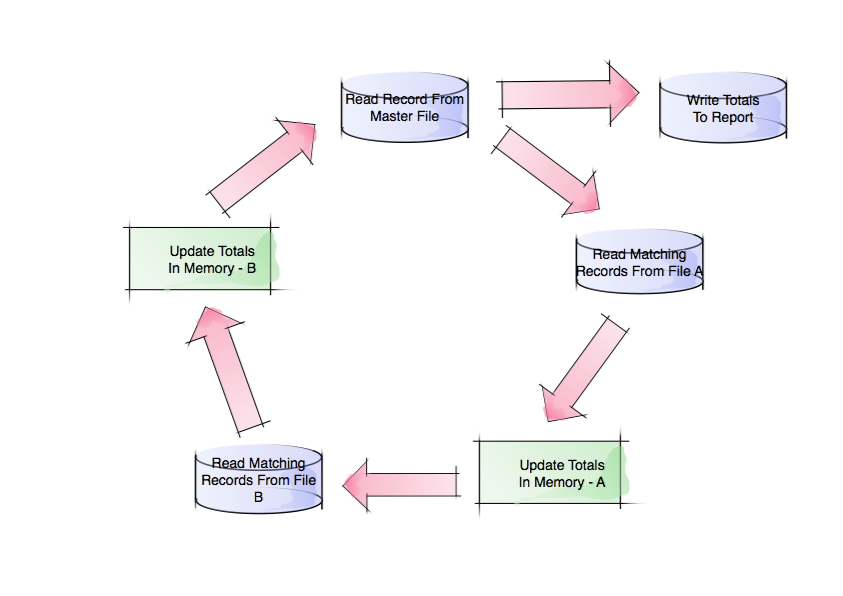 Finding good places to use cloning is the same as finding good jobs to tune, with one further consideration: Because cloning is riskier and more difficult to do you’d want to be sure it was the right tuning action.

If you can find an easier tuning action that makes the batch speed up enough for now, while being scalable for the future, do it in preference to cloning. If you’re "future proofing" an application to the extent where other tuning methods aren’t going to do enough then consider cloning.

Modifying this advice only slightly, consider that you might be able to postpone cloning for a year or two. In this case keep a list of jobs that might need to be cloned eventually.

A couple of examples of where cloning might be indicated are:

Of course, feasibility of cloning comes into it. I’d view this as the last stage in the analysis process. As I like to pun: "the last thing I’m going to do is ask you to change your program code". While there may be some cases where application1program change can be avoided, the majority of cases will require code surgery. The cases where surgery isn’t required are where the data can be partitioned and the existing program operates just fine on a subset of the data.

(This whole post is "Implementation" but this is the bit where the real implementation happens.)

Let’s divide this into six pieces, with reference to the diagram above:

As noted in Part 3, the transaction file drives the loop: Each cycle round it is triggered by reading a single record from this file. Suppose we wanted to clone "4-up" i.e. to create four identical parallel jobs. There are a number of ways we could do this:

There are considerations with all of these:

Changing Programs To Expect Subsets Of The Data

In our example the original program processed all the data. It could make the "I am the Alpha and the Omega" assumption. If we split the transaction file we forego this. The most obvious result is that any report the program would have written needs to be rethought: We probably will only be able to write out a file that feeds into a new report writer (Which we’ll talk about below.)

Batch steps produce, amongst other things, output transaction files and reports. For the sake of (relative) brevity let’s concentrate on these two:

JCL Management is not my forte but it’s obvious to me it’s worth examining the JCL for any job that’s going to be cloned to see how it can best be managed.

It might not be feasible to keep a single piece of JCL in Production libraries for the schedule to submit as multiple parallel jobs. If you can then parameterisation is the way to go. For instance it wouldn’t be helpful to have the job name hardcoded in the JCL. Similarly data set names which differ only by the stream number need care, as would control cards you pass into a program.

You have to change the schedule to accept new job names – for the clones of existing jobs – , insert new jobs (for splitting, merging and reporting), and wire this all up with a reworked set of dependencies.

There are decisions to make, such as whether (in TWS terms) each stream should be its own Application, and what the dependencies should be. For instance, do you keep the streams in lockstep?

One of the key things is planning for recovery: Whereas, in our example, it was all one job step you now have three (or maybe) four phases of execution. Where do you recover from?

In our example, File A and File B were originally each read by the original application program. If they were keyed VSAM, for example, buffering might’ve been highly effective – particularly with VSAM LSR (Local Shared Resources) buffering. Four clones reading these two data sets will have to do more physical I/O. In the VSAM LSR case some hefty buffer pools could help reduce the contention going 4-up might introduce. In a database manager like DB2 things ought to be better: Data is buffered for the common good.

Dare I mention Hiperbatch? 🙂 For the smallish4 Sequential or VSAM NSR (Non-Shared Resources) case this might work well – but it would be a very uncommon approach.

As I hinted above, one of the things that might condition how you split the transaction file is what effect it would have on data contention. If you found a split regime where all the data the clones processed was split the contention could be very low.

If you got to the point where the split regime was "universal" or at least widespread enough some of the contention (and indeed Merging) issues would disappear completely.

Tape is particularly fraught: You can’t have two jobs read the same tape data set at the same time. I’ll indulge myself by mentioning BatchPipes/MVS here 🙂 as it provides a potential solution: A "tape reader" job (probably DFSORT COPY OUTFIL) copying the data to the clones through pipes.

However you do it, the point is you have to manage the contention you could introduce with cloning.

Monitoring isn’t terribly different from any other batch monitoring. You have the usual tools, including:

If you can develop a sensible naming convention for jobs and applications your tools might be easier to use.

One other thing: You need to be able to demonstrate that the application still functions correctly. This is not a new concept, of course, but application testing is going to be challenged by the level of change being introduced.

This concludes the four-part series. If you’ve read all four all the way through thanks for your persistence! The purpose in each was to spur thought, rather then be a complete treatise. My next task is to turn this into a presentation – as the need has arisen to do so. One final thought: If this long (but necessarily very sketchy) post has put you off please re-read Part 1 as I talk there about why this could be necessary.

1 This usage of "application program" most centrally refers to programs written in programming languages such as COBOL. It could also refer to things like DFSORT invocations. The point is these are difficult things to understand and to change.

2 You do know about DFSORT’s REMOVECC, don’t you? It tells DFSORT to remove ANSI control characters – such as page breaks. When separating data preparation from presentation you may well find it useful.

3 I bolded "also" here because the original report probably has a consumer – whether human or not – who’d get upset if it didn’t continue to be produced but might like a more modern format. And if it doesn’t… 🙂

4 While technically still supported, Hiperbatch has functional limitations, such as not being supported for Extended Format data sets (whether Sequential or VSAM). Further, the only way to process Sequential data with Hiperbatch is QSAM. (For DFSORT you’d have to write an appropriate exit – E15, E32 or E35 – to read or write the data set.)

2 thoughts on “I Said “Parallelise” Not “Paralyse” Part 4 – Implementation”