Sometimes a little visual tweak can make all the difference. This post is about one such case.

Actually the code change to achieve it was quite complex but the visual rearrangement is simple.

For Production most people (sensibly) define their ICF LPARs with dedicated processors. But it’s perfectly legitimate for Test or Development Parallel Sysplexes to use shared processors.

Both the customers whose data I’m looking at right now have such a mixed arrangement. [1]

Up until now our code has stacked up ICF LPAR CPU usage by time of day like so:

Though you can’t see it (as I’ve cropped the legend off) the LPARs are stacked alphabetically. There’s been no more logic to it than that. 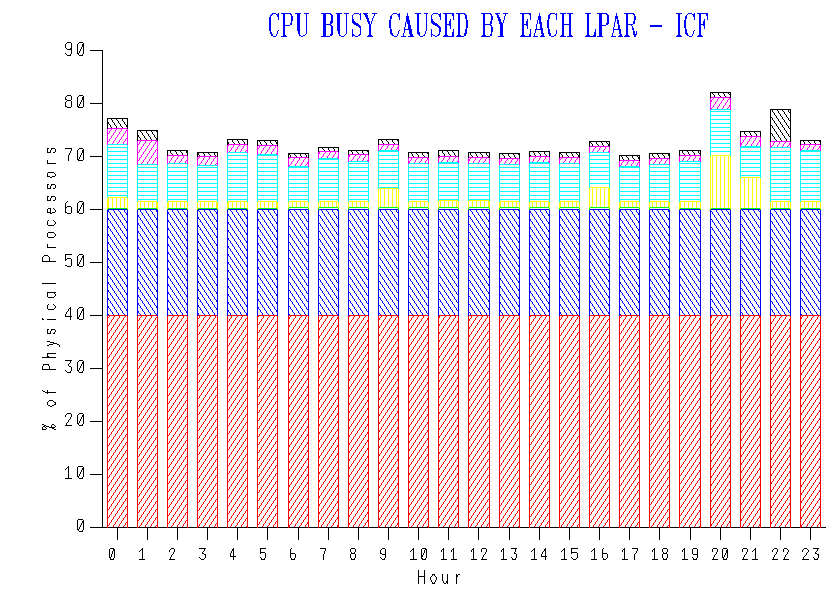 In this redrawing I sorted the LPARs by Number Of Dedicated Processors descending and, within that, alphabetically.

Here we clearly have two LPARs with dedicated processors. This being the ICF pool the ICF LPARs don’t give the processors back.

The remaining LPARs share what’s left of the pool.

You can see the red LPAR uses 40% of the pool and the blue one 20%. We happen to know that the pool has 3 dedicated ICF processors and 2 shared.

We’re much more clearly depicting the 2 LPARs with dedicated processors.

As I said this is a minor tweak, but it’s a much nicer result. If you’re graphing your ICF processor pool you might like to consider this rearrangement of stacking.

There are some further tweaks I could make. For example:

I mention this re-engineering as I half expect it to enable more creativity in how we depict processor pools. If anything worthy of sharing comes up I’ll share it here. Stay tuned!

One thought on “A Picture Of Dedication”