The last post hit both the “Mainframe” and “Performance” aspects of this blog. This one is firmly in the “Topics” category.[1]

You might’ve noticed a slew of announcements from Apple recently, and iOS 9 and OS X 10.11 “El Capitan” delivery. [2] I’d like to talk here about one feature of iOS 9 that is more useful than it appears at first sight: Slide Over on the iPad.[3]

What Slide Over Is

If you have a modern enough iPad or iPad Mini you can use Slide Over.[4]

In landscape mode (is there any other?) 🙂 you can slide over from the right of the screen to display a vertical list of apps in the right-hand third. It looks like this:[5]

App developers have to explicitly support Slide Over and quite a few have. Apparently it’s not difficult.

Why Am I Excited About This?

Well, apart from the novelty, there’s a nice use case – which becomes much slicker:

Suppose you’re writing and you want something done to a chunk of text. The first example I stumbled over was extracting some text from a BBC News website article and wrapping it in quotes. I wanted to tweet the text and a link.

The following workflow would suffice:

Actually I did a very similar thing to create the numbered list above – using the List function of Texttool: 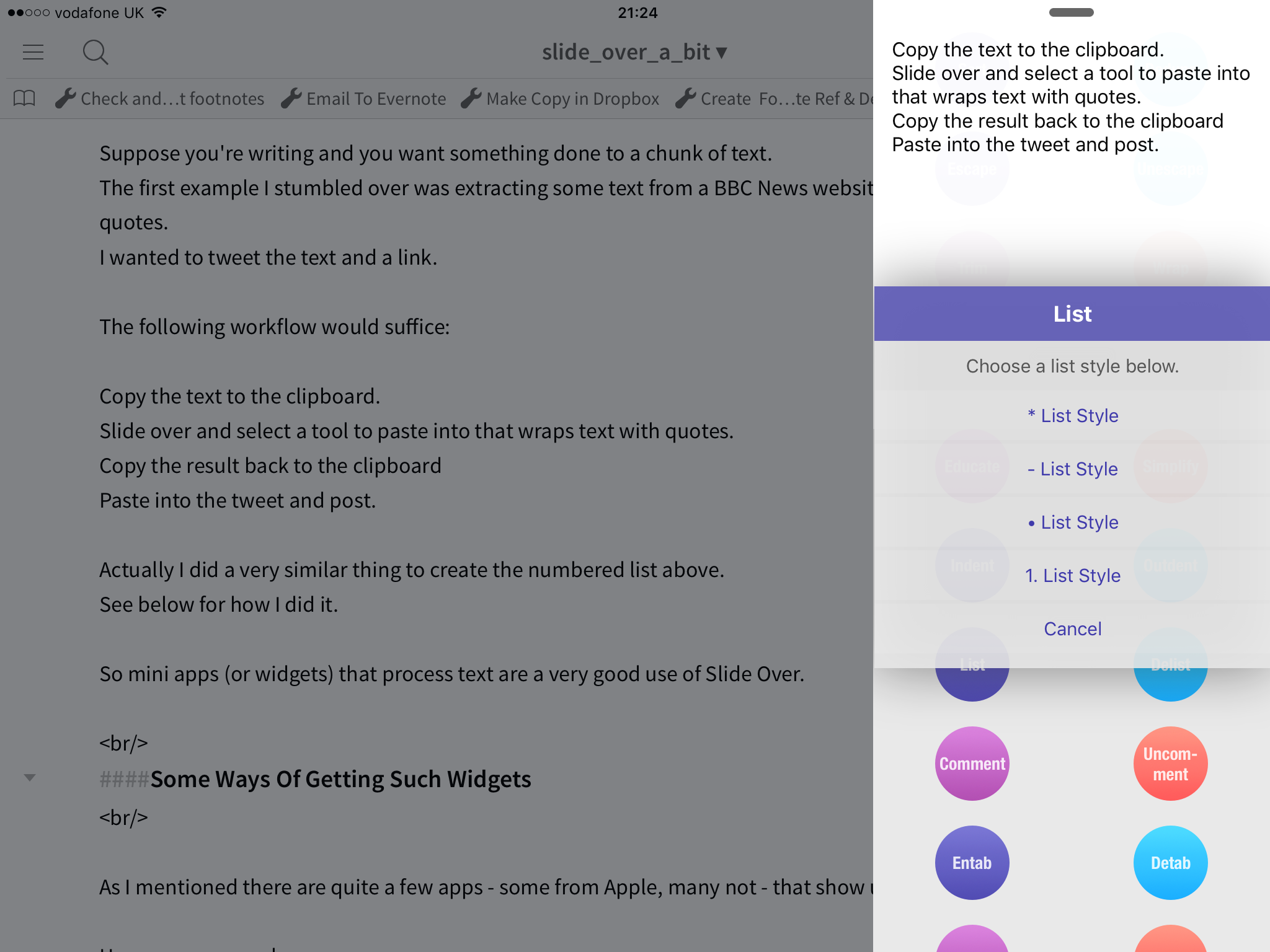 In the above I chose the numbered list option you can see – and then pasted the result back in to Editorial.

Notice how Editorial is greyed out while Texttool is in full colour.

So mini apps (or widgets) that process text are a very good use of Slide Over.

Some Ways Of Getting Such Widgets

As I mentioned there are quite a few apps – some from Apple, many not – that show up in Slide View.

Here are some examples.

In several of these – Workflow, Texttool and Roll Your Own – I’ve succeeded in wrapping pasted in text in quotes.

One of the most flexible (and not that difficult) ways of building your own is using bookmarks in Safari to locally hosted web pages.

As an experiment I set up a simple webserver in Pythonista using (the possibly inadvisable) port 80:

(By the way I just used Texttool in Split View to indent the above code by 4 spaces to get it to format as code in Markdown.)

Anyhow, in the same Pythonista directory I created quoteText.html:

In Safari I have this bookmarked and Safari can be used in Slide View with it.

In essence I’ve prototyped my own Slide Over text processor. This one wraps in single or double quotes any text you paste into a prompt.

As you can see it’s very simple.

Creating an HTML 5 web app from a remote webserver that stays permanently on the iPad is left as an exercise for the reader. (I’ve done something similar before but, having Pythonista, I didn’t need to for this example.)

It’s Not Quite Perfect

Slide Over is saving me time. But there are some things that could be better:

But overall I think the “side bar widget” use case for Slide Over is compelling.

I briefly mentioned OS X 10.11 El Capitan. At last it allows you to have two windows up – snapped to either side of the screen. I’m going to experiment with snapping stuff to the right side – in a similar vein. I don’t expect it to work as well. Perhaps the Today view is the analogue.

One thought on “Slide Over A Bit”