Many people know I’m a bit of an Automation “nut” but like most such people I feel a smidgeon of guilt that I might:

But let’s dismiss Item 2 straight away; Fun is an enabler and motivator in the best possible way.

Doing it well, consistently, quickly, in a tailored fashion, and with only the minimum amount of human interaction.

By the way this post follows on from Automatic For The Peep-Hole.

Some automation is easy to justify: Our Production code, for instance, is irreplaceable. Without over-egging the justification it, in its many iterations, has been used worldwide in dozens (if not hundreds) of engagements.

Where It All Gets A Little More Difficult

In “Easy Cases” I alluded to usage metrics: User population and use counts.

But what if the number of users is frustratingly small? I could, for instance, develop a piece of automation and find no other takers, despite offering it as a “token of love / esteem / whatever “. I’ll come back to trying to answer that in a moment.

Let’s consider why you might end up with “an audience of zero”:

All these factors can lead to a “dinner for one” situation.

My colleagues, family and friends have myriad different kit. For example, some are on Windows. Further, people connect to different z/OS systems or web services.

Still further, I’ve bought a lot of software on iOS and Mac OS; Most people around me – immediate family excepted – won’t have access to this software. The same is true of hardware.

“My fairy king can see things … that are not there for you and me” applies, I’d say. 🙂

So I stumble across irritations that others don’t, and vice versa. More positively, and more relevantly, people see opportunities for automation in a somewhat haphazard way.

Suppose I build something for you; Do you want it as much as you would if you built it for yourself? “In your own image” one might say. I would guess not.

An Example Of A Hyperspecific Piece Of Automation

I was listening to an episode of Nerds On Draft podcast where they were talking about note taking and also Taskpaper format. Taskpaper format is a plain text way of describing tasks.

One of the reasons it interests me is you can import Taskpaper text into Omnifocus and have it parse it into new tasks.

Here is an example:

This is an incredibly simple example of a Taskpaper format task. But note even this contains some nice date maths.

The scenario I thought up has two components:

I got this working with a pair of very simple Keyboard Maestro scripts.

Here the text to be turned into a task is highlighted. 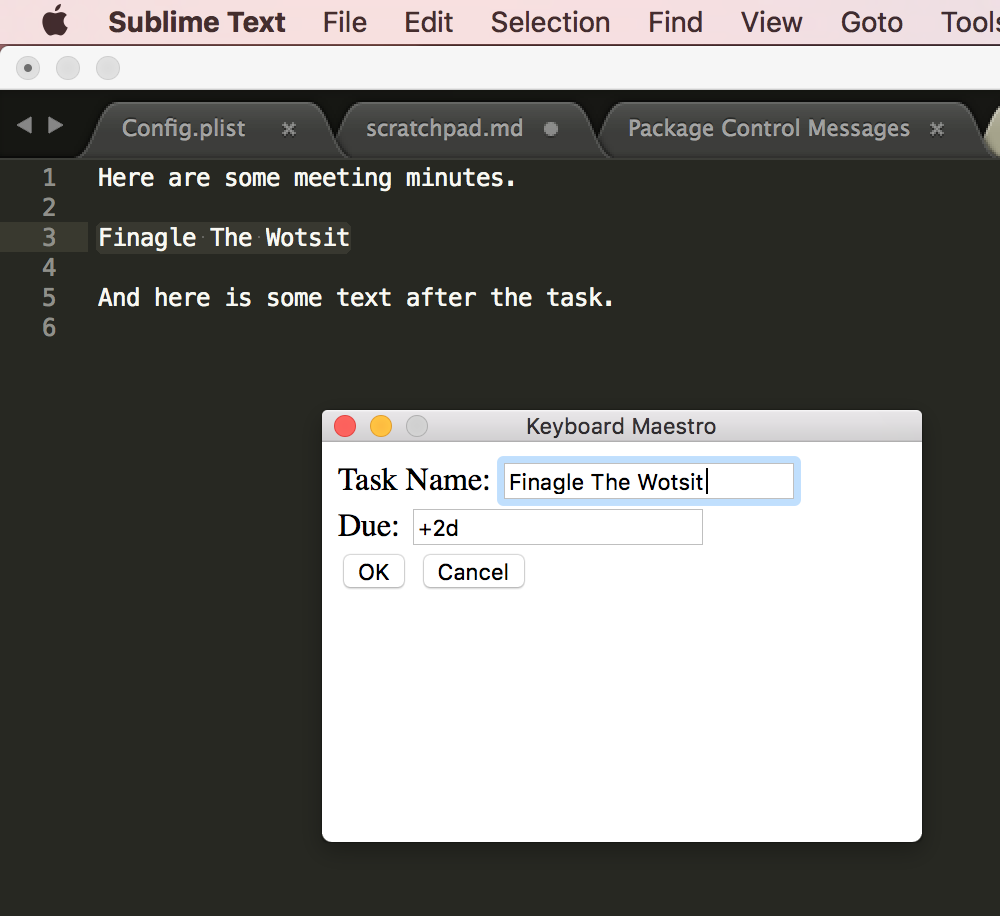 Here the Keyboard Maestro dialog is displayed. (It is very basic HTML but could be fancier.)

Here the highlighted text has been replaced by a Taskpaper task – as a result of selecting “OK”. 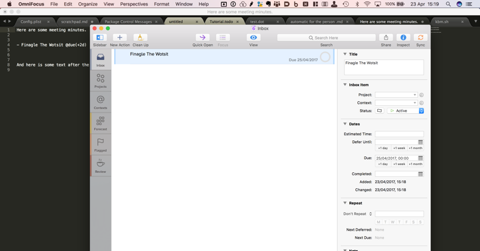 And here’s a screenshot of the task added to Omnifocus.

Note: There could be several tasks in a set of meeting notes processed this way, so it is faster and better than doing it by hand.

While I can believe other people might benefit from this automation, I’d think them thinly spread around the globe.

By the way, I got really frustrated just now with all those links: I’ve decided any URL I use should be in a file in Markdown format – ready for pasting into anywhere. The process of acquiring those links and massaging them is tedious, fiddly and error-prone; I could build lots of automation around that . 🙂

Obscure automation opportunities like these abound in my life.

What Is To Be Done?

I wonder how many of you will recognise the cultural reference in the title of this section. No matter. 🙂

It seems to me people could get a lot out of automation. The key point of this post is that often you have to build it yourself, for yourself.

So, what can self-confessed automation freaks like me usefully do for others? I can think of two things:

In this post I think I’m doing the latter. I hope you feel encouraged.

And a parting thought: Some of you might think “why spend your own money and time on automation that only benefits your employer?” My, admittedly fiscally unoptimised, point of view is the removal of frustration is well worth the cost. Besides, as I said, it’s good clean fun. 🙂

2 thoughts on “Automatic For The Person”