Writing about writing; How meta is that? 🙂

It’s been 4 years since I wrote Appening 3 – Editorial on iOS. (In the same year I went on to write Appening 4 – SwiftKey on iOS. So here we are with another thrilling “Appening” episode.)

Seriously, it’s been a while since I wrote about writing tools. And much has changed since then. But I’ll net it out: I’ve moved most of my writing from Editorial to Drafts – when on iOS.

Editorial, if you recall, was a Markdown authoring app with built in workflows. Most particularly, it was extensible through Python. I say “was”. Technically the word should be “is”. But I have my doubts about that, the app not having been updated for years. And that has made most users of Editorial quite nervous.1

I have to say that I hadn’t invested much time in building workflows in Editorial, but I had become very comfortable with it as a writing tool. One thing that really helped was direct support for Dropbox. What this allowed me to do was to write stuff on either an iPhone or iPad and have it sync to my Mac. And, though I’m not big on pictures in my posts, it could retrieve images from Dropbox when previewing.

For some time now I’ve been writing on iOS devices and finishing off and publishing using Sublime Text. First it was on Linux but, when I got my work Mac in March 2017, I continued using Sublime Text. (Sublime Text has built-in Markdown support and can readily convert to HTML. I paste HTML into this blog site to post.)

I’m now using a nice writing app – Drafts – on iOS. Recently Version 5 was released, which is a rewrite and has a significant set of enhancements over prior versions.

Because I want to support the author and, naturally, I want all the functions2 I’ve gone Premium, paying a subscription. I don’t consider it a lot of money and I’m quite careful about how many apps and similar I sponsor. This one is worth it.

One consequence is I’m switching to JavaScript automation from Python. Funnily enough, I now know far more Python than I did then. JavaScript is, of course, almost universal. And, me being me, I have a working knowledge of both3.

There are quite a few workflows available for Drafts, some written in JavaScript and some using composable building blocks. In that way it’s similar to Editorial. One I’ve used in this very post is one that makes footnote creation a snap4.

Another one is Markdown Preview – which uses a HTML Preview built in stage. What’s nice about this is it uses an HTML template I can modify. This, as any Drafts workflow could, has placeholders for e.g. the first line of text. Which I think is rather nice.

If you were considering using Drafts as a writing tool you should be aware of one limitation. Recall the bit about Editorial embedding images when previewing Markdown? I haven’t found a way of making Drafts do that. As I finish off writing in Sublime Text – and my images will make it to the Mac anyway – this is only a minor annoyance for me. But if you were doing everything on iOS it might put you off.

Drafts for many is a “first capture” app for text. The expectation being that you move the text elsewhere. What might be debatable is how late in the text curation process you move it (if at all).

I’m writing this in Drafts right now, using an iPad with an external keyboard. I don’t intend to move it until I’m more or less done with it. I can, through its syncing, continue to edit it on my iPhone. In fact I’ve done that on previous blog posts. 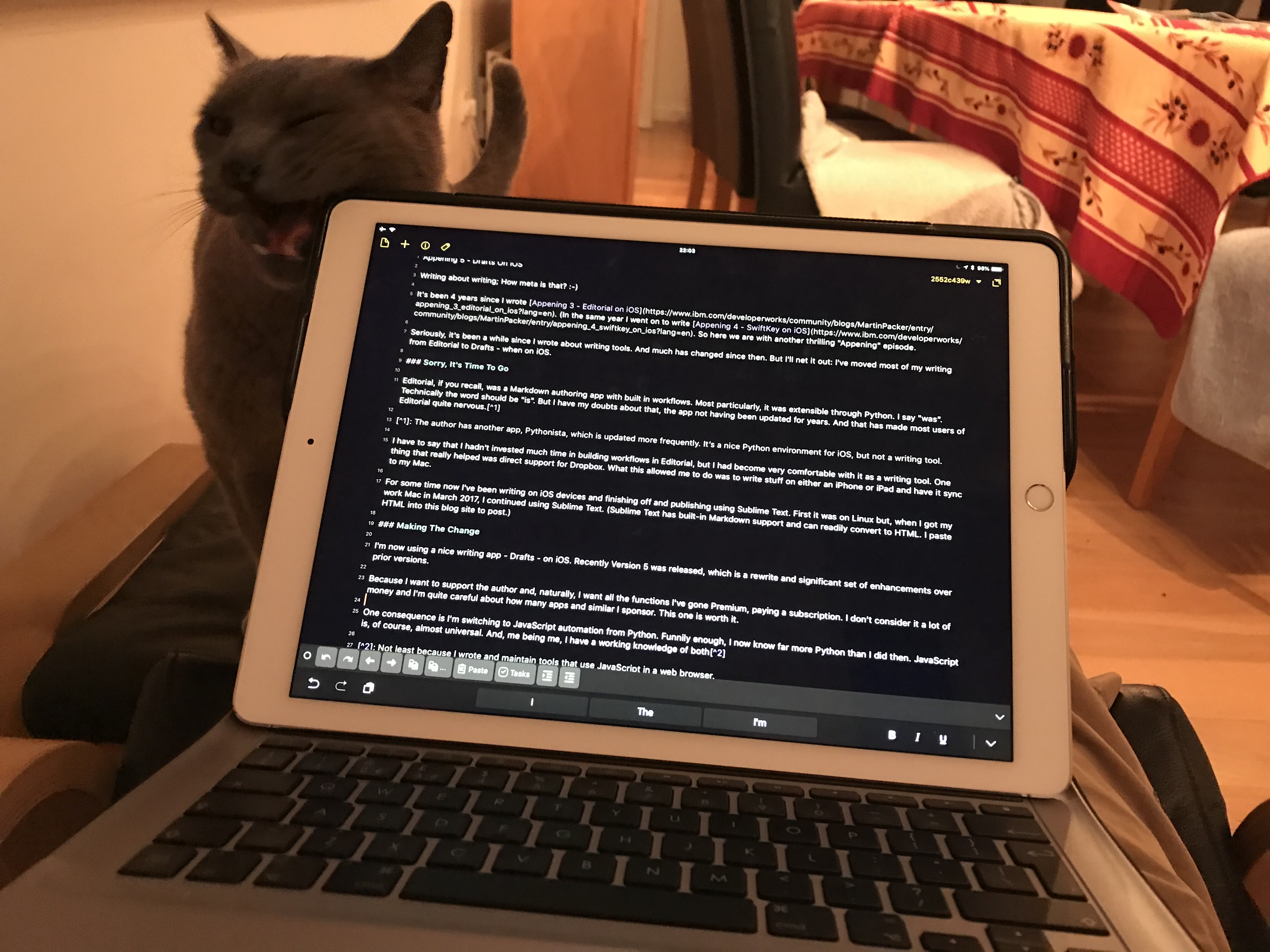 As you can see, sometimes I get some “help” with my writing. 🙂

One of the nice features is that I can capture text by dictating into my Apple Watch. I wouldn’t use that for more than a sentence or two, though. Once dictated, it syncs to Drafts on the iPhone and hence to the iPad.

Actually, through the wonders of the Workflow app (soon to be Shortcuts in iOS12) and x-callback-url inter-app linkage, I can get text into Drafts a number of different ways.

I just like the idea I can get text into it any number of different ways.

Sometimes my posts start with a title (usually with a bad pun in it). Sometimes they start with a one line notion. At one point I thought that if that was all the payload I shouldn’t bother writing posts but should just tweet. That was 10 years ago and I now know I have rather more to say. In fact I do both; You might’ve noticed that one-liners in tweets turn into pieces of posts.

Anyway, the point is “just get writing, no matter how garbage you think it will be” seems like a reasonable mantra. And I think I need to deliver that to my mentees, as they have points of view to get out.

The other point, and this is what this post is really about, would be this: Be prepared to shake up your writing tools every so often, as new possibilities open up. Particularly ones that mean you can capture ideas anywhere. Technically, that could even be in the bath, with the advent of waterproof phones. 🙂

Most of all, have fun with writing! Now get on with it. 🙂